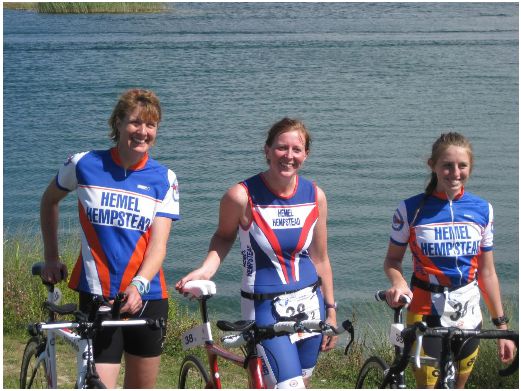 Hayley Oates will be competing for Team GB in the European Sprint Triathlon Championships next year. Hayley is part of Hemel Hempstead Cycling Club, which also has a tri section. Her HHCC triathlon team won the Triathlon England Regional Relay event in 2015 and came third this year. Now, after 11 races this season, she has qualified for the championships in Germany next summer and is looking for sponsors to support her efforts. Sprint triathlons consist of a 750m open water swim, straight into a 20km bike and finish with a 5km run. Hayley’s current PB is 1 hour 11 minutes. She said: “Earlier this year I set myself the goal to qualify to represent Team GB as an age grouper (30-34 years old) in the European Sprint Triathlon Championships next year. “In the past I’ve only raced in small, local sprint tris and done quite well but racing with the big girls in the British Champs, English Champs and the actual qualifier in Nottingham were both eye-opening and terrifying! “From fracturing my toe in a mass start swim in one race (and because my feet were numb for the entire race I didn’t realise at the time so didn’t feel it necessary to pull out of the race), to seeing the determination and pain etched on some faces showed me that I wasn’t the only lady aiming to qualify. “I’ve raced 11 times this season which is unheard of, however, the hard work’s paid off as I am now a Team GB age group triathlete and get to race in Dusseldorf in June 2017!”