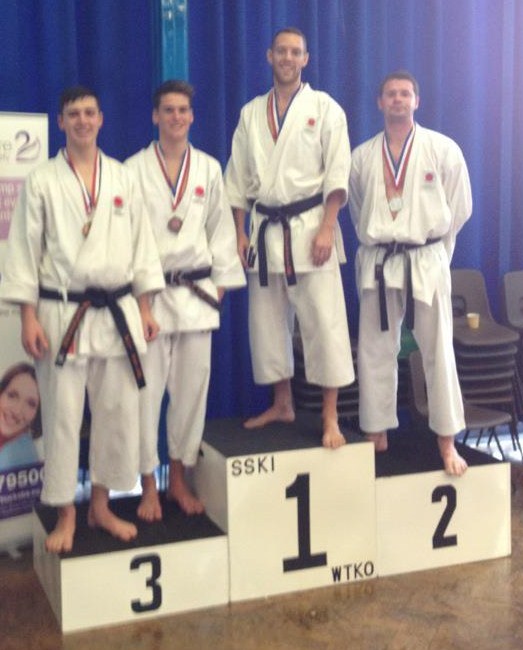 At the weekend at the Association UK National Karate Championships, the local SEISHINKAI SHOTOKAN KARATE INTERNATIONAL clubs from Dacorum had another great day winning four gold medals, but sadly this time the Hemel Hempstead club just lost out on the coveted shield for coming out top in the overall medal table, which this time went to the Slip End club in Luton. They took seven gold medals with the London club in second place with three golds and the Hemel Hempstead (2), Berkhamsted (1) and Bovingdon (1) clubs taking a total of four. The adult competitor of the day was won by Adam Cockfield 4th Dan, which was no real surprise as Adam is the 2011 World Champion. The under 16’s competitor of the day trophy was taken by Cameron West.
For the Dacorum area Daniel White 4th Dan and the instructor for the Berkhamsted club won the men’s senior free-fighting final in real style and young Zak Cole from Bovingdon took the under ten years title. Muminah Koleoso from Hemel Hempstead won the young girl’s free-fighting final and the adult team kata (forms) of, Stacey Barton, Sam Richards and Danny Richards, also from the Hemel Hempstead club took this title in style.

An extremely successful day for these local clubs that over the years have produced many, World, European and National champions and are rated as one of the best groups in Europe. These local clubs are situated in: Hemel Hempstead, Bovingdon, Berkhamsted, Kings Langley, Watford, St Albans and Luton. Anyone interested in joining (children or adults) please ring the worldwide Chief Instructor, Malcolm Phipps 8th Dan on 01442-266048 and ask for further details or log on to the Association website: www.sski.org