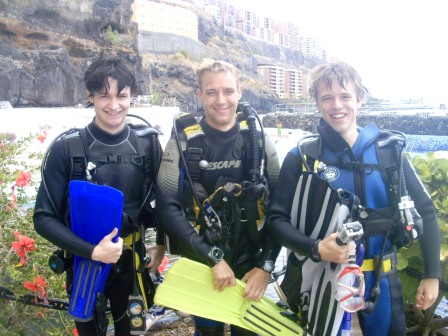 Three young Dacorum lads with smiles on there faces. On the left is Toby Plummer on the right is Tom Saunderson both having just completed there wreck dive. This was there last dive of there Advanced Open Water Course. In the center is me Matthew Harland I started Matthews Sharks SCUBA Diving Club five years ago. I love SCUBA diving off the coast of Tenerife, there is so much to see, plus the water is warm. Having spent a week on the island we managed to get in eleven dives. Two dives off the club boat, one night dive, diving into a blow hole [spooky] Diving with turtles (which were very friendly as they come up to you to see what you are doing). Eagle Rays were spotted just below us on one dive and diving thru a ball of fish the size of a house was among the great dive experiences we had that week.

We at Matthew Sharks have had an exciting 2011. With helping to promote Dacorum on the island of Tenerife by taking a group of young people from Falconer school to SCUBA dive around the island. Then there were the French university students we took out on our club boat ‘Scuba Sue’ for a week’s SCUBA diving. Back in England it was not all warm water SCUBA diving. At Kimmeridge Bay Dorset we helped the Dorset Wild Life Trust carry out there annual survey of the bay. With more people taking up SCUBA diving in the Dacorum area we spent our Thursday nights training young people in the pool at Hemel Sportspace.