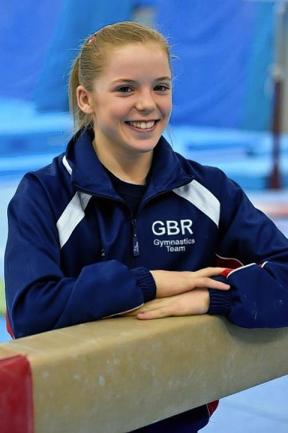 Gabby, who trains at the Sapphire School of Gymnastics in Hemel, was selected as part of the national team to compete at the tournament in Bern, Switzerland last week.

She performed on both the bars and beam and her good routines helped the GB team to a silver medal.
This is the best ever result for a Sapphire gymnast.

The GB line up of Gabby, Becky Downie, Ellie Downie, Claudia Fragapane and Ruby Harrold matched the silver won in 2014 with a final score of 170.312.

Britain and winners Russia were well clear of the other nations in the final despite both counting falls in the ‘all routines count’ format of the competition.

Gabby, who turned 19 on Sunday, tweeted afterwards: “European silver medalists–to be back out there on the floor with my best mates was insane, I’ve dreamt of this moment for a long time.”

Gabby, coached by Steven Price, also made the bars final in Bern but an early fall after losing grip on a big release skill was costly. However she jumped back on and competed cleanly to score 13.400 for 7th place.
It’s been a hugely successful comeback for Gabby in 2016 following an injury-plagued period that saw her miss several tournaments. In April this year she won the uneven bars gold at the British Championships in Liverpool.