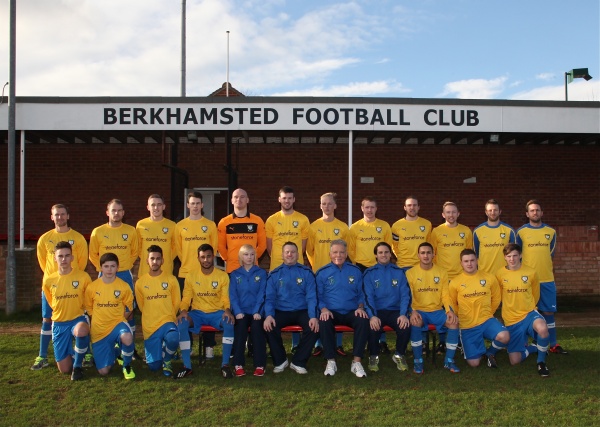 Berkhamsted beat Tring 3-2 to take the Herts Charity Shield at Hemel on Tuesday night in front of a large crowd.

Carl Tasker was unavailable for Berko so keeper James Weatherill made his debut in goal and Lewis Rodrigoe was fit to return at sweeper while Josh Chamberlain returned up front. All three were pivotal in the win with Weatherill saving a penalty, Rodrigoe clearing off the line at a crucial stage and Chamberlain winning the player of the match award, making one goal and scoring another in the closing stages.

Berko made the better start with Matt Bateman’s shot being saved by Jack Hopwood.

Adam Mead got his 18th goal of the season with a free-kick from the left that beat Hopwood, to become the leading scorer for the season to date.

In the 35th minute a penalty was awarded to Athletic for a handball. Weatherill pulled off a great save to keep out Chris Stapleton’s spot kick.

Ashley Lewis headed over from a Chamberlain pass.

Hopwood did exceptionally well to keep out a Chamberlain shot from a neat pass by Bateman. Alex Campana then crossed but Chamberlain’s header was saved.

Just before the interval, Athletic got a surprise equaliser. A shot from Chris Vardy was saved but the loose ball was tucked home by Stapleton at the top end.

That gave Tring heart and they went on to dominate the early part of the second-half with ex-Comrade Koeiran Turner behind their best moves.

Stapleton then headed home from a dead-ball cross to give Tring the lead with half-an-hour left.

Berko responded by replacing their midfield trio, who were all suffering from knocks in what was their third game in six days.

That set up a grandstand finish, with Athletic trying to hang on to their lead.

Chamberlain created the equaliser in the 80th minute, supplying a pin-point cross for Bateman to arrive in the six- yard box to net for the fourth consecutive game.

Chamberlain was left unmarked in the box and smashed home the winning goal with his left foot past Hopwood in the closing stages with Athletic left appealing unsuccessfully for offside.

Injured club captain Jim Baldry stepped up to collect the’ plaque and shield.

It was the new Berko club’s first county trophy.

The silverware will be on display at Broadwater this Saturday when Berko host third-placed Cockfosters.