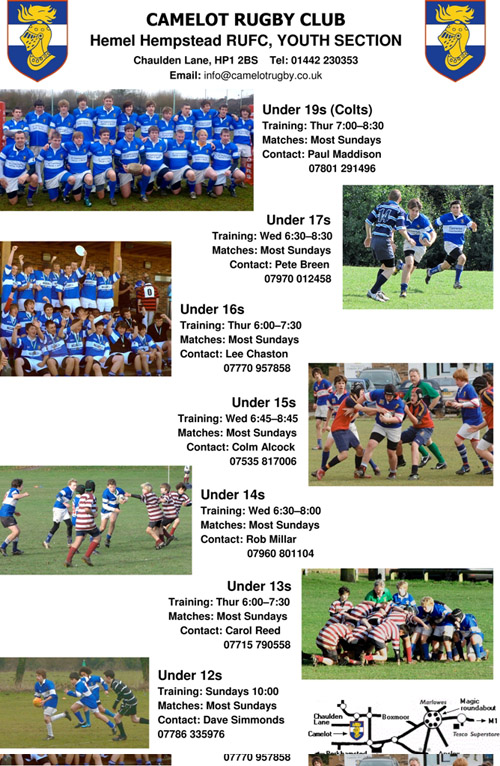 Camelot is Hemel Hempsteads Only Rugby Union Club
Camelot rugby club was originally started 1919. It has been and is still a grassroots club with strong community values. Our three playing sections are Minis, Juniors & Seniors. Girls play in mixed teams within the Minis. The juniors have their own girls section where they have their own games and tournaments. We don’t currently have a women’s team. The Minis start playing Tag rugby at very young age as young as 5 – our under 7s are the County Cup Champions! With three sections we have a total of 15 playing teams soon to be 17. The juniors section plays 15 a side traditional rugby on a full size pitch. They play in cup and league competitions which can be very competitive. The Colts, and the newly formed under 17 team are very much the feeder to the senior teams. Until this year the youth teams stopped at u16 which allowed some of the players to wander off and play for other teams. It may be a challenge as many will move on to university & start working but it will strengthen the senior teams for later years and help the Colts section straight away. Camelot this year will start a girls section. Currently girls play for the Minis section but could not progress further. This year they can now Join either the under u15s which is for school years 7,8 & 9 or u18s for years 10,11 & six formers. Our senior section has currently 4 teams a 1st, 2nd, 3rd & 4th Team. All our teams are revered, especially our first team as the club ethos is never to give up so no team, however strong comes to play Camelot expecting an easy win, if they can win at all! The 4ths squad comprises your old school grizzled war-horses - those players who once played 1st and 2nd team but whose knees are now definitely 4th team - along with fresh-faced youngsters keen to take the step up to senior rugby. Every Thursday evening through the summer we play mixed age and sex tag rugby for all. With very much a family environment, the club insists on holding on to the traditional rugby values and promoting sport for the enjoyment and reward through success for all age groups. I personally have seen what the club has given my two sons. It has given them a very strong grounding for two typical teenage boys, they have formed strong friendships within the club and have a very strong feelings of belonging to something very special.