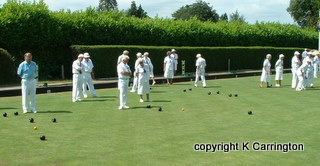 POTTEN END BOWLS CLUB set in rural Potten End Village
The Club was first formed by Miss S Courtald - a member of the textile family - in 1929. a strip of land next to the Village Hall was laid as a three rink Bowling Green. Our first game was played on the 15th June 1929 against Coopers Recreation Club 2nd team. Although the club had only been open two months they had made excellent progress at the game and ran victor by 14 shots. A special fund was created in 1953 and grew to £850.00 towards a new green. The Ladies Section was formed in 1957 and they played their first game against a ladies team from Hemel Hempstead - 1 rink only. By 1960 the club had raised £2,500.00. Max Bryant - Club President at that time, gave part of his land to the club for a nominal sum, and Ewart Millar, Club Secretary, embarked on a do-it-yourself in which the club members toiled for two years
All grass 6 rink bowling green a clubhouse with bar facilities. The club is open April to September. Winter social activites at the clubhouse and indoor winter bowling matched arranged with local indoor clubs 01442 878297 keith@pebc.org.uk