Dacorum Sports Network was formed in 2007 and accredited as a Community Sports Network (CSN) with funding from Sport England in 2008. As a CSN we bring together community clubs, volunteer groups and public organisations involved in delivering sport in the community and ensuring a healthy and active community – including public sporting facilities providers, local councils, and schools.

Past projects have included: 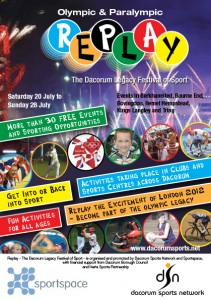 In 2013 we organised the Replay Festival – a programme of sporting opportunities and activities across Dacorum that celebrated one year on from London 2012.

In 2014 we partnered with Dacorum Borough Council to win a quarter of a million pounds worth of funding for sport and the promotion of healthy activity in Dacorum.